The Chinese translation is finally ready to be played! Special thanks to Redmisty. Some translations are currently missing; we will update these as soon as possible.

Replays may occasionally desync. We think they work pretty consistently now, but as always, record your gameplay live if you want to be 100% sure it’s saved.

This patch has some relatively minor balance changes and bugfixes. We’ve also released a free demo on Steam! Be sure to tell your friends. Also, the Japanese translation has been finished! Special thanks to MSLabo102 for his hard work.

Replays may occasionally desync. We think they work pretty consistently now, but as always, record your gameplay live if you want to be 100% sure it’s saved.

Version 1.02 has been moved to a separate branch. If you have replays from that version and still want to record them, use Steam’s Betas feature.
To access old branches, right-click on the game in your library, choose Properties, click on the Betas tab, and select the version from the drop-down menu.
To switch back to the current branch, set the branch to None.

This patch will be the last one with major balance changes. Unless it breaks something.
Then we’ll fix it. The goal is to make Easy (and some of Normal) more accessible by changing some of the more unusual patterns.
There are also some changes to some of the harder patterns on higher difficulties.

Rin does fine damage if you’re not in the boss’s face. If you are in the boss’s face, however, she destroys things. We like shotgunning doing more damage, but not to the point of completely destroying certain patterns.

Replays may occasionally desync. If you want to be absolutely sure that your gameplay is saved, record the game live if you can. We’re working to fix this; if you notice any things that cause desyncs, please let us know!

Version 1.01b has been moved to a separate branch. If you have replays from that version and still want to record them, use Steam’s Betas feature.
To access old branches, right-click on the game in your library, choose Properties, click on the Betas tab, and select the version from the drop-down menu.
To switch back to the current branch, set the branch to None.

EUB released a bit over a week ago, and we’ve gotten a lot of feedback from players about what they love about the game, as well as what they don’t like. We’ve been working this past week to fix many issues and better balance the game, and we’re proud to release version 1.01.

We’ve made a lot of balance changes to the game to lower the difficulty and make the player characters easier to use.

Rin should be able to handle stages well with her spread shots. She should still do acceptable damage to bosses. We’ve increased her ability to do both.

Kasen is the forward focus shot. She should do more damage than the others, but her spread being too narrow and her rocks firing infrequently made achieving this difficult.

We’re not going to change her a ton for now – instead we’re making her options go back to her earlier so she’s a bit harder to use. You’ll have to stay focused more to keep her options in place.

More damage is more fun! Bombs will be better at destroying enemies.

The game has generally been made easier. If you thought that Easy Mode was way too hard, please feel free to give it another try!

There’s too many balance changes to list every individual thing, but here are some notable ones:

Greetings, internet! It’s been a while since our last blog post, and even longer since the start of Ephemeral Unnatural Balance’s development. Now, EUB is rapidly approaching completion, and to complement this we’re giving these Devlog posts a fresh start. This post will be the first of a series that discusses the game’s stages: reasons behind design decisions, issues we’ve faced along the way and other fun little tidbits.

We’ve played Stage 1 so many times that we’re absolutely sick of it.

In terms of design, Stage 1 is pretty simple and standard. It was the first stage of the game to be developed and was released in 2013 as a standalone prototype, version 0.11. System-wise, the game was pretty different back then. Discord doesn’t generate life pieces, which makes sense because the Balance gauge drains far more quickly. All Balance is lost when the player dies, a feature that luckily didn’t last very long. What did last long was most of everything else – Stage 1 has remained nearly the same since its initial creation.  The only significant changes are during the Tojiko fight – her first spell and Encore Spell in particular. The Encore Spell was almost entirely redone. Her first nonspell also got a bit of visual polish, but it plays identically.

This version of Tempest of Susanō was used in the 0.11 prototype. The arrows come from Tojiko’s left and right, and she helps out by firing rings of yellow bullets. Since Encore Spells are completely optional patterns that the player faces if the Balance meter is high enough, they can typically afford to be more difficult or gimmicky than a regular pattern. However, we decided it was still too much. It’s pretty easy to memorize, but memorization in Stage 1 is pretty weird and not very fun.

This version of Tempest of Susanō is what will ultimately be in the finished product. It still makes use of zig-zagging arrows, but they only come from one central location. We thought it was a much simpler pattern to read, and doable on the very first try if you’re good enough. Play-testers liked it more and it’s more fun than the old one, so it’s here to stay.

While there weren’t many changes pattern-wise, there were plenty of updates to the visuals and the story. Almost everything visually in the stage has been updated, from elements of the HUD to character art to the bullets themselves. Stage 1 was supposed to take place as the player leaves the Hakurei Shrine to start her adventure, but you wouldn’t know it from the background. Both of the earlier versions of the background depicted some sort of path which was supposed to be to the shrine. However, one was merely a prototype and the other didn’t play well with AMD graphics devices. You can see these below: 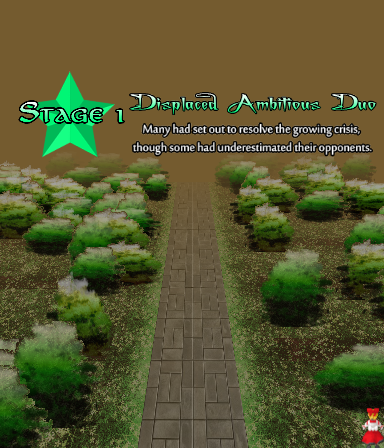 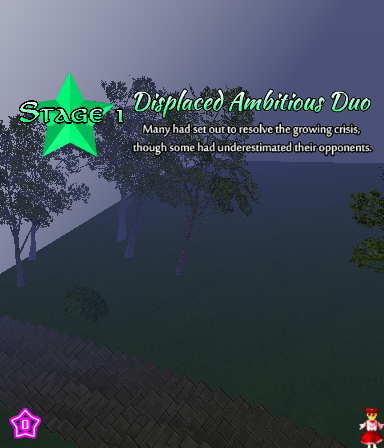 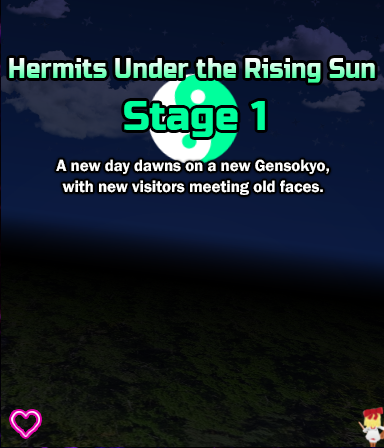 The leftmost image is from the prototype, while the background pictured in the center hated my AMD card. The rightmost image will be in the final version – the sun rises as time goes by, brightening the screen.

A sunrise makes sense, as the Stage 1 theme is Dream Sunrise. This song hasn’t changed much, but the Stage 1 boss theme changed drastically. Porygon goes into more detail about this stage’s music in his post coming soon.

Interestingly, Tojiko wasn’t actually the first boss to be made for EUB. To get to her, we’ll have to move on to stage 2.

…Also here’s something silly that Futo did at one point.

As promised, here are some songs that will hopefully be in the final game!

This is the first track for Ephemeral Unnatural Balance not composed by ExPorygon, but rather Spectral Nexus.

“After having difficulties capturing the intensity of the original,
I ended up instead making a slow buildup to a more powerful climax.
I believe it evokes a more melancholic feel, which fits Shizuha rather well.
It’s quite long for stage 2 but that’s why I made a timeout Last Spell :p”

Ephemeral Unnatural Balance started as concept in early 2013, with production starting late 2013/early 2014. Along the way multiple people joined the team working on this, including SpectralNexus’ wonderful musical contributions and my wonderful compacity to annoy spur Porygon into action. I have a bit of background in Danmakufu as well, producing some scripts every now and then.

EUB is coming along nicely, and Porygon comes up with excellent danmaku patterns both himself and from our suggestions. Concepts are one major part of the process, but implementation and testing are another thing. A concept can be amazing but if it’s not fun to play, too hard or too easy, it needs changes.

This is where I come in! With helpful feedback like “this wave of bullets is too slow” or “there’s not enough time between cycles of this attack” or “You should add Momiji Spark”, I help ensure that the game is the highest quality it could be. Look forward to another demo, and eventually the full release!