Welcome! My name is Eric “ExPorygon” Oswald, and I am the director and lead programmer of 東方逆妙乱 ~ Ephemeral Unnatural Balance as well as the founder of Ephemeral Entertainment. I’d like to personally thank you for joining me on this exploration of the development of EUB.

So let’s not waste any time! Ephemeral Unnatural Balance began its life sometime during 2012 (it’s hard to remember exactly when). I had recently joined the Walfas Station Wagon skype group and had made a number of friends, including Sturmgeschuts, a fanfiction writer. I don’t really remember how it came up, but we were talking about overlooked characters in the Touhou Project series, especially the ones that only appeared as midbosses. We basically thought, “What if there was a game that starred all of those characters?” That’s how the idea of EUB came to be. Sturm would write the story and I would program the game.

While I was still developing another game, the Touhou-Mario crossover, Kingdom of Mushrooms, my will to continue it was on the the decline. The game was…weird to say the least. Honestly, the reason I started that project was partly due to my extreme enthusiasm for making danmaku patterns at the time, as I had recently learned how to program with Danmakufu. I longed to explore what sort of danmaku patterns that characters outside of Touhou would use. This is why I made the Doopliss halloween script and I kind of wish I had just stopped there. What I really mean is, I wish I had simply made standalone boss fights of the characters I wanted to do, instead of making a full game complete with a story. And the story is where the game kind of falls into the weirdness. As someone who usually finds crossover stories to be jarring, weird, and sometimes cringy, I don’t know why I decided to try and make one myself. The time-saving decision to make all of the players have the same dialogue wasn’t helping matters. I still think the story has a few redeeming qualities, like the Bowser dialogue and my plan for Doopliss, but it’s still pretty strange. By 2012-2013, I had begun to realize that the game would at best be seen as a weird meme game among the community, even if it was super well designed (and it wasn’t). I was longing to make a “real” fan game, one that could proudly stand alongside the likes of Concealed the Conclusion and the recently-released The Last Comer. The idea for EUB came along at the perfect time and even though I said that I would finish KoM eventually, I think I knew all along that that really wasn’t likely to happen.

So we hit the ground running with EUB. I started designing the players and Sturm began writing the story. To fit with the theme, we decided to make the incident about a power reversal spell that would be unleashed upon Gensokyo. Traditionally powerful characters would become weak and vice versa. The name, Ephemeral Unnatural Balance was chosen by Sturm to represent the game, as it’s about a short-lived, unusual balance of power brought about by the spell. Here is one of the earliest mock-covers for the game, made by Kappatalist (uploaded by Sturm). 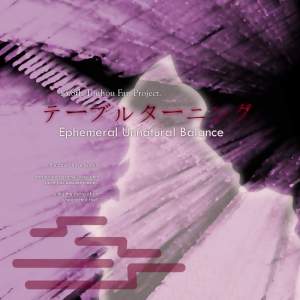 Unfortunately, we couldn’t have known at the time that Double Dealing Character would ultimately beat us to the theme of flipping the status quo on its head. Luckily, there were enough key differences between the two games that it ultimately did not matter much (not to mention a difference of 5 years in release). For example, Seija was aiming to overthrow society but was stopped before she could. In EUB, the upheaval has already started, and the effects are evident by the power and demeanor of the encountered characters.

By late 2013, Sturm had already completed the entire script for the game. I was blown away by it! More than anything, the script signaled to me that this is really happening, that EUB was going to be the Touhou fan project that I had dreamed it of being! More motivated than ever, I set out to making music and starting the actual design of the stages and bosses!

That’s all I’ll cover for now, the next devlog will continue with the development of Stage 1. Thank you for reading and we’ll see you next time!